Pictorial History Campbelltown and District sets out to break the stereotypes that have plagued Campbelltown for decades. Local author and photographer Jeff McGill illustrates in his new publication how the city is mulit-dimensional and has many facets to its character.

The book is a fresh look at a community through local eyes and shows the community’s vibrancy, enthusiasm and strength. It illustrates how the community has endured many challenges from the dreamtime to the present. 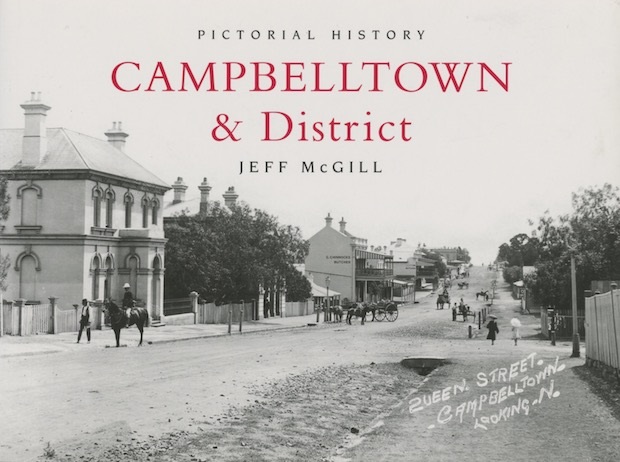 McGill’s use of images peels back the layers of meaning and reveals the heart of the city. Photographs demonstrate the dynamic nature of the community and how it has changed over time.

Historical photographs show an immense amount of detail and are an archive of meaning about the past. Quite often the viewer feels that they are intruding on a private event or function.

Sometimes the photograph poses a host of other questions. Why is the street not paved? Why is the women’s dress that long? Why are people wearing those funny clothes? Why are there cows in the paddock? Why are their no electricity poles?  These are all part of the composition of the photographs in this pictorial history.

Jeff McGill provides a  perspective of the lived local experience of Campbelltonian and a journalist’s nose for a good story. McGill has published a number of local histories that show the hand of someone who understands the nuances of small communities.

After growing up in Campbelltown, going to school in the city McGill worked for the large metropolitan dailies. He then returned to Campbelltown so he could write stories about interesting people rather than those based on hard bitten sensationalist attitude to journalism in the big smoke.

It is this attitude that shone when the Macarthur Advertiser, under McGill’s editorship,  took out two national awards for the best local newspaper in Australia. He has been praised for being a passionate Campbelltonian and it shows in  Pictorial History Campbelltown & District.

The images that McGill has chosen for the book show the same characteristics that are part of successful journalism in the provincial press. Each image tells a story about local characters and identities and capture a snapshot of a time long past.  McGill’s deft eye for composition and impact as a photographer is clearly demonstrated in his layout work in the book.

The images are drawn from a range of archives – Campbelltown City Library, the Campbelltown & Airds Historical Society, many private collections, individual photographers and the author. Many of these images are not accessible to the general public in any form and this publication breaks ground in this area.  The book is complemented by a select bibliography and index.

Some of the images  show important events which had repercussions on the national stage  like the election of the Whitlam government (p. 123),  and the First (pp. 54-61) and Second World Wars (pp. 81-87).

More that just a narrative Pictorial History Campbelltown & District is an entry point to the daily lives of those living in Campbelltown. The images are accompanied by a lively story about the characters and events from Campbelltown’s past.

The city has not always received a good press in the Sydney metropolitan dailies and this publication challenges these stereotypes. This collection of images provides a human side to the local story about real people with real lives who create a vibrant  community.

The Campbelltown community has many community organisations that are the basis of the city’s resilience and one of these is the Campbelltown and Airds Historical Society which contributed a number of images to the book. The society also provided the venue for the book launch in the wonderful atmospherics provided by Campbelltown’s historic house Glenalvon.

The gathering was introduced by past president Kay Hayes, followed by publisher Catherine Warne from Kingsclear Books. Catherine outlined the history of her firm over  30 years of publishing. She said that Campbelltown pictorial history was one of the last pieces of the jigsaw of the Sydney area for her firm. She had been trying to complete her coverage of the metropolitan area for many years and this book was the first time that she has had an author take over the design work.

Jeff McGill then spoke about the gestation of the book, its development and fruition with the support of many people and organisations. Jeff outlined how there were lots of images that were considered for the book and a culling process narrowed down the selection. The chosen were those which told a story or provided the greatest meaning to the Campbelltown story.

McGill made the point that quite a number of the images came from family photograph albums that he had been given access to over many years. This was  the first time that they have been published. Jeff would visit local families be given afternoon tea and he would copy the images from the family album.

Jeff McGill’s Pictorial History Campbelltown & District  provides a human side to the local story about real people with real lives who create a vibrant and wonderful community. The city has broken free of many of its stereotypes and ghosts, yet it still continues to face many challenges with a positive outlook to the future.

View all posts by camdenhistorynotes

This site uses Akismet to reduce spam. Learn how your comment data is processed.